In a magical enclave of happy circumstances, in what has been the Dão Demarcated Region since the beginning of the 20th century, the Melo family’s dedication to viticulture is lost in time, but not in the people’s memory. A legacy that, by the hand of Julia Kemper, is spread all over the world.

The Melo family has been working the Dão lands for four centuries, the sacred soil of national winemaking, based on a language of close proximity to the language of the earth and the syntax of those who not only respect but love Nature and seek the best practices to obtain its fruits without compromising its ecosystems. An updated grammar, since we live in the present and face the future, but it brings this primordial love from the past, this idea that the human element is just one more to take into account, in the overall picture where abusive interventions are not allowed and where natural, organic and biodynamic agriculture, organic and vegan wine, balance, love and passion are not just words thrown into the wind, nor are they influenced by fashions and trends. In this narrative, the author’s dedication is passionate and binds him to the land from seed to wine, with a heart that beats in time with the seasons and the changes in Nature and that, at Julia Kemper’s house, heiress of the Melo’s ancestral know-how, the philosophy is “to cultivate and care with love and intelligence”. That is why, today, talking about the Dão Demarcated Region or Dão wines is synonymous with talking about Julia Kemper and her socially responsible production.

Dão stands for a river and wine 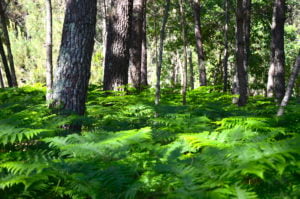 This poetic and harsh landscape, of soil hardened by granite and schist, quartz and silica, where little or nothing was expected to grow, is fortunate to be the home of wise and determined people, who knew how to read between the lines and dedicate themselves. with body and soul to the earth, from its sprouting extensive vineyards and delicious nectar, with a unique personality and characteristics, recognized and rewarded throughout the world. Established in 1908, the Dão Demarcated Region lives on geographic contrasts, playing hide and seek with large peaks, mountainous areas and valleys, of lesser or greater gradients, where the vineyard almost hides and coexists with the native vegetation. A geographic undulation that cushions the impact of the humid air masses of the coast and the harsh winds coming from the east, giving the region a temperate, cold and rainy climate in winter and hot and dry in summer. Another of the climatic vagaries of the Dão Demarcated Region is its thermal amplitude, which favors a long and slow ripening in the grapes and promotes complex flavors.

It is in this landscape of miracles made, where it seems so much has been made from so little, that Julia Kemper’s ancestral terroirs spread, and its 11 vineyard plots that form Quinta do Cruzeiro, in Oliveira-Mangualde, at altitudes of between 300 and the 650 meters. It is also here that the memories that Julia’s family dedicates to vineyard and wine are lost in time, which are deposited well beyond the date that determined the Dão as a demarcated region.

In this poetic metric, imposed by the Beira landscape and by this visceral relationship between Man and his land, between Julia Kemper and his wines, it is well to speak of generosity, of that which is characteristic of this soil and these people, and where a river that, playing with gifts, is itself called Dão, an appropriate word, which before being a wine name, was already naming the water.

This website uses cookies to improve your experience while you navigate through the website. Out of these, the cookies that are categorized as necessary are stored on your browser as they are essential for the working of basic functionalities of the website. We also use third-party cookies that help us analyze and understand how you use this website. These cookies will be stored in your browser only with your consent. You also have the option to opt-out of these cookies. But opting out of some of these cookies may affect your browsing experience.
Necessary Always Enabled

Any cookies that may not be particularly necessary for the website to function and is used specifically to collect user personal data via analytics, ads, other embedded contents are termed as non-necessary cookies. It is mandatory to procure user consent prior to running these cookies on your website.